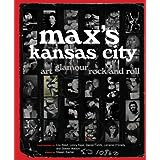 "Max's Kansas City: Art, Glamour, and Rock n'Roll," by Steven Kasher a book of images  with contributions of a variety of artists, writers and musicians who made the great hangout what it was, will be coming out on Sept. 15. It will cover the entire story of Max's, which was really two bars, one opened by Mickey Ruskin in 1965 as a hangout for his artist and poet friends which including Willem de Kooning, Robert Rauschenberg, Joel Oppenheimer and Andy Warhol--the other when Tony Dean Mills bought the place and reopened it in 1975  as a punk venue with booking agent Peter Crowley.

Max's had three floors--ground floor restaurant, 2nd floor bar/stage, and third floor dressing room. I saw a great interview with Debbie Harry about Max's. She was a waitress there, in its first incarnation before she made it big with "Blondie." In it she says she worked the back room, where the famous people hung out...and they never tipped her. For more early Max's stories from Ms. Harry, here is the rest of the video:
Some of the famous acts that played the early Max's were The Velvet Underground, John Lennon, and Bruce Springsteen. Moving right along, because if I hear anymore about these superstars I am going to scream... (Rolling Stone is having a special issue this month on Beatles songs. I am starting to think rock n' roll is dead. Or maybe Rolling Stone is dead.) But here is Springsteen at Max's. He's still around.

The first incarnation of Max's closed in 1974 because the art/poet crowd was starting to disperse.


The 2nd Max's opened in 1975. Here is some found film of the ground floor restaurant.


It was the kind of place where the steak was $2 and juicy; the nearly famous in the third floor dressing room didn't have waitress service;  people had sex in the bathrooms, office and phone booths; and many of the acts, including Devo, The Heartbreakers,  The Misfits, Blondie would soon make it big. Sounds like a great hangout to me. Here is some film of the Senders with Johnny Thunders of the Heartbreakers:

Max's closed due to a slow decline. The drinking age was raised, and mass transit in and out of Manhattan became sporadic after midnight.

Over the past few months, I've been racking my brain as to why I've met so many people who played in its later incarnation. Some people say it's because I like older guys. (I do.) But mainly it's because I was hanging out at the Continental in 1993-5. I think Noel, who booked bands at the Continental, was still nostalgic for Max's. And also thought he could make money on others' nostalgia for the place. The bands who had played Max's were definitely the best on the Continental's bill including: "The Waldos" (Walter Lure from the Heartbreakers, Joey Pinter from The Knots) Simon and the Bar Sinisters (Simon Chardiet from Joey Miserable and the Worms) and The Senders, who had a weekly Monday night show.

Max's Now
Max's Kansas City has reinvented itself as an online brand, maxskansascity.com, with a blog, photos, and classic t-shirt sales. The dot-com claims to have curators that keep up with the best in art, fashion and music like the nightclub, but it seems to me that reviews of new art and culture was not what Max's was about. Being surrounded by music, art, fashionable people, and people waiting and working to be discovered was the real reason to be there.

I have known fine artists my whole life, plus any number of working musicians and writers. And none of them talk about the hottest new anything, and if they do, they make fun of it. Most creative types try to outdo each other on the coolest thing no one's heard of, the technical side of their job and each other. Sorry maxs-dot-com. In my book that's a fail.

Can the Max's Phenomenon Be Recreated?
According to Billy Thompson of the Senders, people tried to replace Max's after it closed, but no one could agree on whether to hangout at Trammps or the Danceteria.  I don't think you could get more than five really creative people to agree to be regulars at the same place since.

There has been some success in making nightclubs popular with the very rich and famous--just by charging a lot of money at the door and hiring the right doormen.


But I don't think that's what Max's was about. I think back then, New York was a lot less about money. I think this allowed creative people and others to hang out and be themselves together, all in one joint. Like so:

With thanks to Wild Bill Thompson, Bob Gruen, Jay Braun and Peter Crowley.
Posted by Sonja Kodiak Wilder at 9:46 AM